What is the Tuktuk Tournament?

The aim of the Tuktuk Tournament is for YOU and your companions to fully integrate into the culture of Sri Lanka, to make you explore the heart and soul of the island through the eyes of locals while keeping the concept of “sustainable tourism” at heart. You will be completely immersed into Sri Lankan life through its food, art, sports, fashion and people. In the tournament you are immersed into a magical story as you journey across the scared island of Ceylon completing quests, challenges, and collecting treasure. You will immerse yourself into the lives of locals, hunt and gather delicious food, uncover breathtaking mountains, discover unknown roads, pray at unreachable temples, swim in divine waterfalls, explore ancient ruins, harvest tea and coffee with locals, and maybe even get chased by stray elephants!

You will be given quests and challenges that will spread you and your team of comrades all over the island to get you off-the-beaten track and give you experiences that go far beyond mainstream tourism. You will interact and integrate with the local Sri Lankan culture and people in true and meaningful ways. This all while pioneering the island in your self-driven tuktuk by “choosing your own adventure” to uncover it’s magic, the people and the true heart and soul of Ceylon.

“I don’t like being told to go from A → B → C and visit the main tourist attractions and the “bucket list” items on my holiday. When I travel, I want to have the power to choose my own adventure, I want to be able to go on a journey of discovery and go down the rabbit hole as the opportunity presents itself to explore the true local culture and people in a sustainable way. That’s what the tournament is about, choosing your own adventure and following the opportunities the road presents to you while being part of something bigger as you seek to find lost treasure across the island of Sri Lanka. The Tournament is a framework for your adventure, it will help lead you down the right path, to find hidden gems and experiences. It will help give you opportunities to find the “magic” of the island through its culture and its people. The quests, challenges and locations are designed with this primarily in mind. You will experience something you’ve never experienced before as you journey and pioneer the island with your group of heroes to uncover the Tri-Wheel Trophy.”

The 13th of December 2017 marked the closing of the first ever Tuktuk Tournament. With over 45 participants and 18 Tuktuks competing in an epic bounty hunt exploring the true, raw, and beautiful island of Sri Lanka, it was an experience not to be missed. Teams from all over the globe were represented in an action packed 10 days of pioneering Sri Lanka under the sponsorship of Red Bull. We had teams from around the globe representing; Belgium, Italy, South Africa, United States, Norway, UAE, Switzerland, Australia, Austria, The Netherlands, Colombia, United Kingdom, Canada and Germany.

We are pleased to announce the event exceeded all expectations and was hailed as a blinding success! The top three teams of the 2017 Tournament are:

The first day of the Tournament was a day to cover all of the logistics of the competition. After a buffet breakfast, teams gathered at the Mt Lavinia hotel to listen to what the hell they signed up for, this would be followed by a buffet lunch, swim at the beach or pool, and tuktuk driving and maintenance lessons. That night would be the costume party. The Tournament Team introduced four core concepts on the morning of the first day:

The Quest book is one of the primary tools to aid the heroes on their journey through Ceylon. It is a book that contains information about the Tournament, about the story, and about the quest to reclaim the ancient Tri-Wheel trophy. It contains instructions on how to collect more treasure and various side-quests opportunities that will present themselves while you are competing in the Tournament. Each of these side quests will gather you gems (points) over your time travelling around Sri Lanka. These quests are designed to be “play as you go” and allow you to explore the unexpected and go down paths you might not go down otherwise. We don’t want to lock you into a specific route or a specific experience penalise you for joining a random Bailia (dance party), we want you to take up all of the magical opportunities you encounter on the road and fully integrate with the locals and their culture. Below is a short excerpt from the quest book:

Each team on the Tournament has their own totem. The totem is the living and breathing incarnate of that team. It is the spiritual essence of the team and carries all of their yin and yang energy. It is a precious treasure that must be protected. For the 2017 Tournament, stealing the “totem” would result in a 3 point penalty for the affected team, but, after 5 days on the road we changed this and converted stealing into a “team building” exercise. Though team building, heroes could gain points by joining together and completing challenges together. This lead to much more positive interactions.

Along with your quest book, a very important aspect of your journey is the Tournament map. This is a digital map made on google maps with the GPS coordinates of all of the CHALLENGES and LOCATIONS that are present throughout the Tournament. You will be reading and studying this map to figure out how to collect the most treasure in the least amount of kilometers as you traverse the island. 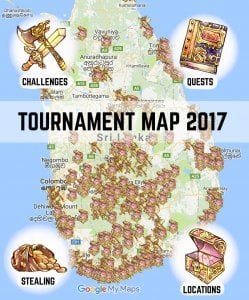 The tournament is not just a race, it is a magical journey across Sri Lanka. The theme for the first edition in 2017 was subsequently named “Magic Quest”, and the story was molded and shaped around this theme. We get you into the magic, we make sure you are pioneering the countryside like a real hero, slaying dragons and uncovering ancient treasure. We get you into the vibe and spirit of the journey through three key speeches. This allows YOU, the heroes, to delve further into the story of ‘Raffia Ketch Pour’ and uncovering the lost treasures of Ceylon. Here is a quick excerpt from one of the speeches:

To help aid in taking people on a journey, on an integrated experience through Sri Lanka, the Tournament team also makes video diaries throughout the Tournament to look into very important matters! Keeping people updated about all aspects of the tournament. Please see some examples below.

The Guardians of the Nebulosa were 3 companions that had never met each other until the day before the Tournament. We are awaiting them to reveal their story in more detail (blog to follow), but for now, enjoy some pictures and experiences from their journey. Part of their story is summed up well by a traveller they met on the road, Heather. This is the post she made to one of the guardians after meeting them:

I will never forget the moment when the Guardians of the Nebulosa walked into my life. I’m leisurely sitting at the table eating my dinner at the guesthouse when I look up to see the new guests arrive. My first though, “What the hell is this?” A religious group? No, I’ve been on this island long enough to know they didn’t belong to any religious group. Besides, the fruit on their shirts and little red hats gave them more of a carny feel. Like they were part of a travelling circus. But most of all, they looked as if they had their asses handed to them.

I was instantly absorbed into their adventure and wanted to help them in any way that I could. Water, food, where to find gems and most importantly, helping them celebrate their first night on the island. Edgar pulled out a leather pouch that concealed a bottle of rum that made the voyage with him. At the end of the evening the bottle held only enough rum to be left behind for me to savour.

The next few days we would look for #guardiansofthenebulosa, #tuktuktournament, #tuktukrental on our feed to see what “the boys” had been up to. We loved following them around the island and comparing their efforts to other teams. I almost pulled the trigger twice to sign up for next year.

Soon the tournament ended and to our shock the Guardians of the Nebulosa didn’t win. However, I still had the bottle of rum to enjoy. The leather pouch replaced a worn out bag and travels around the world with us. I felt that the bottle journeyed so far to the island and it’s story shouldn’t end. A note was rolled and tucked into it and left on the beach for someone to find. The note? A love story of course.

“This has changed the way that I travel forever” said Marco and Ellen, the winners of the tournament. This wasn’t because they were driving a tuktuk, it’s actually in reference to the unbelievable amount of true and genuine interactions they had with locals.

The 2018 tournament will take place from the 20th of October till the 3rd of November. More information can be found on www.tuktuktournament.com. To keep receiving updates, please put yourself on ‘attending’ in the Facebook Event, here.